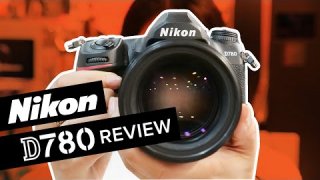 Today we’re going to be looking at the newly announced Nikon D780. This is a full frame DSLR that will be replacing the D750, which came out in 2014. We’ll see that the D780 takes a number of features from Nikon’s Z6 mirrorless camera and fits them into a DSLR body. We’ll take a look at everything new in the D780, as well as make some comparisons with the D750 and Z6. Check the video description below if you’d like to jump to a specific section, and if you find this video helpful please be sure to like and subscribe.

The D780 sports a solid design with good ergonomics that fits well in the hand with a comfortable grip. It’s a weather sealed camera with a magnesium alloy body. There’s the familiar array of buttons and dials across the body, with only one or two minor tweaks from the D750. It features a 2.4 million dot tilting LCD screen, which, unlike the D750, is now a touchscreen. Another difference is that the built-in flash from the D750 has been removed. The D780 also features dual UHS-II SD card slots. Battery life is a particular strength here as well. The D780 lasts for 2260 shots - that’s 1000 shots more than the D750 and 6 times more than the Z6. That all-day shooting capability could definitely be an important feature for some, and the battery can also be charged via a USB-C port

The D780 features a similar 24 MP full frame sensor to the D750, and the picture quality remains high. The processor is now the EXPEED 6 processor from the Z mirrorless cameras. This offers some improvements to high ISO performance and range over the D750. Shutter speed range is also expanded, with a max of 1/8000th of a second and minimum of 15 minutes - in comparison the D750 range which was a max 1/4000th and a minimum of just 30 seconds. Overall though you won’t see significant differences in image quality compared to the D750 - although that’s not a negative point, as both the D750 and D780 provide very high quality imagery

The D780 also features a 51-point AF system when you’re shooting through the viewfinder, like the D750. However, Nikon has said that they’ve added algorithms from the D5 in there which improve the responsiveness of this system. The real differences happen though once we change over to live view, where the D780 switches over to the 273-point on-chip phase detect AF system from the Z6. This means that in live view AF on the D780 is very fast and responsive and does a very good job of tracking subjects - and this carries over to video shooting as well. It also has impressive eye detection and tracking capabilities. Burst shooting speed is 7 fps with the mechanical shutter, half a frame faster than the D750, but if you switch to live view you can jump up to 12 fps with 12-bit RAWs via the electronic shutter. So overall you’ll see good performance from the D780 through-the-viewfinder, but you’ll get a step up once you jump to live view, both in autofocus performance and burst shooting speeds

Video is a major area on improvement on the D780, and this is hands-down the best Nikon DSLR for video shooters. It essentially has the same video capabilities as the Z6. This means UHD 4K with full pixel readout and no crop at up to 30 fps. It can also shoot 1080 at up to 120 fps. In addition, you can output 10-bit video via HDMI using either N-log - for colour grading - or HLG for HDR. The camera has a range of important video features like mic and headphone jacks, focus peaking, zebra stripes, timecode, quick punch in, and more.

So overall the D780’s goal is to take some of Nikon’s advances in mirrorless tech and package that into a DSLR that is otherwise reminiscent of the popular and long-standing D750. And in that goal it definitely succeeds. I think the D780 is a solid, dependable option for an enthusiast or pro who wants an upgrade but isn’t ready to jump over to mirrorless yet - and especially if they have an interest in video. And there are definite reasons why someone might prefer the D780 over a mirrorless camera like the Z6, such as a preference for DSLR handling, optical viewfinder, the longer battery life, dual card slots, or the desire to use Nikon’s large DSLR lens lineup without needing adaptors. I think we’ll see this develop into a popular camera, and a worthy successor to the D750
Keywords
Nikon DSLR
0     0     1.563